Saturday, while most of you were watching the vile sport known as College Football, which has definitely not hurt me in thousands of horrifying ways, I was partaking in a little ESPN Plus action. Nothing is better than watching the ESPN Plus broadcasts most barely notice on the ESPN app itself. A good chunk of them are team-specific broadcasts, as it was in this case. The Saint Louis broadcasters were quite enthusiastic both ways, as they should’ve been; this was a close, fun game throughout. But I couldn’t get over a very specific issue the game’s cameras had. 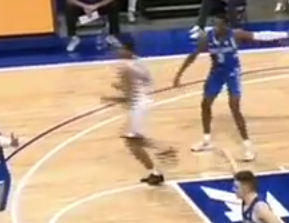 Give it a zoom via your phone. At some point during the game, every player looked like they’d stuck a knife in a wall socket, as if they’re clipping in real life. When I sat on my couch around nine feet away, this was a little bit easier to ignore, but I also was working on the family Christmas tree at this time and got a good close-up of this bizarre camera bug. Remember during the NBA’s restart when they had to super-impose team-specific ads and players would clip into them, like Nikola Jokic becoming Mountain Dew?

This was as if players were clipping in and out of Videodrome, which is a much less enjoyable bug to see unfold.

Anyway, they did play a game despite these camera issues. Saint Louis, who is a legitimate top 25 team in America, defeated LSU 85-81. There’s more specific analysis below, but in an attempt to highlight What This Means in an SEC context, I figure I’d do it like this: even without a crowd, this would be roughly equivalent to losing at Florida. Nothing to really be ashamed of, obviously, but certainly a missed opportunity for a key win.

When LSU had the ball

Similar to how I reviewed the Gonzaga/Kansas game, I’m doing offense vs. defense splits to make this the easiest possible read. Over the Tigers’ first two games, you could find it incredibly easy to buy into this team’s optimism on this side of the ball. Bart Torvik’s individual opponent-adjusted efficiency numbers have LSU as the best offense in America through all of two games played, which does seem like a silly stat to bring up but it’s a stat. It’s not really based on unbelievable three-point shooting, though it has been excellent so far (21-for-50). LSU simply appears to have a collection of great one-sided talent that doesn’t turn the ball over, gets the shots that work for them, and, so far, scores a ton of points in a fun system.

As a stats guy, I have to break my brain a tad to be able to fully enjoy the LSU high-octane attack. For instance, a full 20% of LSU’s possessions were in isolation, which is generally one of the two least-efficient play types…but LSU scored 18 points on these 14 possessions.

That three above was courtesy of Cameron Thomas, who looked every bit the part of a player Will Wade suggested may lead the SEC in scoring. Thomas, a freshman, merely dumped 25 points on the first high-quality opponent of his college career. He appears to be a magnificent shot-maker.

Thomas was electric everywhere in this one, going 6-for-8 on twos and 4-for-10 on threes. If he’d had even a good game – like, say, 16 points – LSU gets blown out. Thomas single-handedly kept LSU alive in the second half during an atrocious defensive performance; 21 of his 25 points came after halftime. Saint Louis, who would be one of the 3-4 best teams in the SEC, had no answer for him at all.

It was a tad surprising that it was he and not slightly older players Javonte Smart/Trendon Watford driving the offense down the stretch, but hey, pandemic basketball is going to be strange. Speaking of those two, they also were pretty solid, combining for 42 points on 25 shots. Smart didn’t shoot very much but he was terrific from three.

Watford had two very distinct halves in this one – in the first, most of his work came in isolation, which seems to be his preferred status:

But in the second, Will Wade found a few ways to get him the ball in the post and let him go to work.

Generally, LSU’s attack seems to be solidly four-pronged, with Darius Days usually having better games than he had in this one. Through two games, LSU appears to have three seriously good deep shooters in their starting lineup, along with a fledging deep shooter in Watford. The key difference between them and several other potentially great offenses is a sort of reverse-psychology approach to analytical shot selection. While LSU took 17 non-rim twos in this game to just 11 shots at the rim (10 of which they made), only two were of the dreaded “long two” variety. (They missed both.) LSU hit nine of their other 15 non-rim twos, with a lot of them being just a couple steps from the rim.

(Quick section on small sample sizes before more about small sample sizes: two games in, LSU appears to have somewhat reduced their ball-screen reliance, with just 16.1% of possessions coming via a pick-and-roll. Last year, this number was 27.2%. They’re also taking way more threes and are less reliant on Javonte Smart/Skylar Mays bulldozing their way to the paint. I need more evidence on this front, but they’re showing signs of taking a serious turn towards being Louisiana Davidson versus being a traditional Will Wade offense.)

Again, we’re only two games in, and plenty of these takes could age poorly. However, it seems clear that LSU has sky-high offensive potential. I think it would be one thing if LSU were simply having a hot streak from downtown, and certainly, I don’t think they’ll shoot 42% from three the entire season or 81% from the free throw line. Still: a formula of low turnovers, high-percentage shot attempts, and various scorers that can take and make difficult shots seems like a formula for consistent success in the high-variance world of college basketball.

When Saint Louis had the ball

On the other hand, this appears to be very stinky garbage. LSU has played an SIU Edwardsville team that ranks 337th on KenPom and a Saint Louis team that didn’t crack the top 100 of Ken’s offensive rankings last year. They gave up 81 and 85 points in a pair of consistently terrible outings. Against Edwardsville, they did happen to run into an unusually good shooting performance from three from basically the entire rotation (13-for-27):

But at the same time, it was pretty alarming that SIU Edwardsville got all of the open threes to begin with. In that one, SIUE had 26 catch-and-shoot jumpers, per Synergy; exactly half (13) were judged as “unguarded”, which I generally take to mean there being no defender within four feet of the shooter. That’s…not great. But at least in that game, you can figure LSU is running at 60% speed against a totally overwhelmed opponent, even though that opponent made them sweat more than they’d expected to.

Against Saint Louis, LSU allowed 25 catch-and-shoot jumpers to the Billikens, per Synergy. The ratio in this one was far worse: 16 of 25 were unguarded. Early on, this was due to LSU just making simple mistakes on the perimeter, like failing to hustle back on defense:

In the second half, once Saint Louis figured out LSU could not stop them inside the perimeter, either, Will Wade began to throw out a half-court trap-heavy zone defense that aggressively went for steals. This occasionally worked, in the sense that it did force one turnover around midway through the second half…but it also led to 17 points on 10 second-half possessions against the zone, including a pair of crucial wide-open threes due to LSU playing the ball too aggressively:

Last year, the only player on the LSU roster who had a prayer of stopping an opponent one-on-one on the perimeter was Skylar Mays, who posted a near-3% Steal Percentage and was a genuine defensive difference maker in several SEC games. This year, I really am not sure who that person is supposed to be, because no one on the LSU defense appeared terribly interested in slowing down Javonte Perkins (32 points) and his variety of drives inside the perimeter.

Perkins roasted every LSU defender that tried him in this game, going 6-for-10 on twos and 4-for-8 on threes. When it wasn’t Perkins, it was Gibson Jimerson – a truly bewildering name of a real person – that hit 4 of his 9 threes. Or it was Jordan Goodwin, who went 3-for-4 at the rim and picked up 11 rebounds. Or it was Demarius Jacobs, who went a perfect 4-for-4 at the rim. The point I’m getting at here is that Perkins will deservedly get the headlines, but if it was just Perkins having a great day, you could reasonably write this off as an unfortunate loss. That isn’t the case here.

Let’s go back to the SIU Edwardsville fixture. The Cougars (yes, I checked) did have that great day from downtown, but they also went 11-for-13 on attempts at the rim and got nine offensive rebounds. As is seemingly tradition now for LSU, they have oodles of length and talent but simply fall asleep for large stretches of any given game:

Check out how LSU, uh, “defends” this elevator screen run for Saint Louis’s Demarius Jacobs. For a full second, Jacobs is so wide-open that Jordan Goodwin is either too shocked to throw the pass or legitimately can’t believe it:

Multiple times, LSU’s defenders simply completely lost track of where their man was supposed to be. Yes, it helps that SLU hit 9 of their 16 non-rim twos, 2-3 shots above expectation. Then again, LSU had an unusually good day from the same range. Giving up a 12-for-16 hit rate at the rim to a team whose tallest starter is 6’6” is extremely alarming, especially when it’s Saint Louis’s offense that’s supposedly their weaker side.

I guess I’d be less alarmed if I were an LSU fan if SIU Edwardsville had a similar-ish day against this Saint Louis team, who they played on Wednesday…but SIU Edwardsville lost to Saint Louis by 37 points and committed 25 turnovers in a game they probably would’ve lost by 50 had the Billikens not pulled most of their starters with ten minutes to play. They only turned it over 15 times against LSU, who, again, hired a defense-first head coach that now oversees one of the best offenses in college basketball.

Obviously, that seems like a mild joke, but I think it’s legitimately worth discussing. When LSU hired Wade, he’d just come off of two seasons at VCU where his defenses ranked 24th and 41st in adjusted efficiency. For a non-Big Six team, those are really good numbers. VCU generally always has great defenses, of course, but Wade’s forced a ton of turnovers and made opponents take tough shots. At no point during his first four years as a head coach did his offenses look anything other than fine. Through three-plus years at LSU, his defenses have ranked 136th, 59th, and 179th, with this year’s contingent starting to look like it might set a new low. When your goal is ostensibly to take LSU basketball to new heights, having defenses this bad puts a hard cap on your hopes. Then again, maybe you just win every game 94-92.

If you want a defensive positive or two, LSU did start to force some key turnovers from the Billikens when they needed them; in particular, the second half was better for Watford. Also, after giving up five true (i.e., not out-of-bounds accidents) offensive rebounds in the first half, they only gave up two in the second. Other than that, well, they should probably start rooting for Skylar Mays 2.0 to somehow find his way to the basketball team. Or for Shareef O’Neal to live up to the hype, I guess.