This is the first in a weekly-ish series of two-game recaps of the 2021-22 Tennessee men’s basketball season.

I’m still working out how to do these in a manner that makes sense; the goal with these recaps is to essentially replace how I’ve been starting out the How Tennessee Matches Up section in game previews in recent years. Those had sort of become half-recaps half-previews, which achieves 0% satisfaction and doesn’t fulfill the needs of either a recap or a preview. This is an attempt to keep those as separate as possible. I can acknowledge the past without obsessing upon it.

In some ways, that’s how it felt to be in Thompson-Boling Arena last Tuesday. I hadn’t been there for a non-exhibition game since March 2020; I’d attended two public sporting events (Hurricanes-Predators Game 6, as well as a Memphis football game) in the 18 months since. Being near others again in an environment that was promoting joy and excitement felt as wonderful as I’d hoped. Tennessee’s less-than-perfect performance was excusable, simply because it’s like seeing an old friend after a long time apart. One or both of you is gonna stumble a few times; that’s where forgiveness comes in.

Maybe that’s where this starts: happiness with a little bit of forgiveness mixed in. I can forgive the first game jitters, I can forgive some of the fan behavior, I can even forgive it taking longer than normal to produce a popcorn-and-hot-dogs order because it was just a happy place to be. At its best, this is basketball, and basketball is generally always where I’m hoping to be.

Right, yes, the recaps, which start with

This felt…fine? Like, think about it this way: Tennessee-Martin hit some shots they normally don’t, shot about what you’d expect from everywhere else, and those shots happened at the same time as Tennessee’s one true cold streak of the game. Was it annoying? Sure. It also meant absolutely nothing by game’s end; if Tennessee had kept the starters in until 0:00 they would’ve won by 35 or more. Speaking of which…

Fan Complaint #1 of 2021-22. You can be too negative online. I would know. Many years of Sports Frustrations have led me to realize I talk about the stuff I dislike more than my likes; I’ve been attempting to combat that lately, but it’s a process. Attending games in-person again helps. Seeing people I know helps. Being able to write these previews and reviews in anything other than COVID times helps. It all feels a lot better than it did in 2020 and it’s nice to report that.

But at some point I think I’m gonna break, and last Tuesday threatened that quite harshly. I attended Tennessee’s home opener and sat in the lower level one section over from the students; probably 15 different times during the night I heard this one guy scream “THIRTY FIVE AND A HALF”. 35.5 is how many points Tennessee was favored by over Tennessee-Martin; I know this because you can’t not know the spread of seemingly any sporting event these days. That’s fine, because it’s useful context. What is decidedly not fine is hearing THIRTY FIVE AND A HALF belched from the gullet of red-faced brain matter into the 71-degree circulated air.

Who wants this? Who needs this? Maybe this is because I haven’t attended a full-capacity sporting event that you can legally bet on in Tennessee since it became legal but it felt kind of overwhelming. THIRTY FIVE AND A HALF screams. Two guys high-fiving because the two teams met an arbitrary number of combined points that represented the over. THIRTY FIVE AND A HALF guy again, because apparently his entire row bet on it as well but blessedly weren’t vocal about it. Maybe I am too old at the ripe age of 28, but I swear there was a time where you just…attended games? And rooted for your team? And generally didn’t care too much about the final margin, unless you love KenPom Time? Maybe this is just something that I, Will Warren, must get used to. It’s plausible that I am the problem here because I don’t bet for reasons I’d prefer to keep private, but…am I?

SEC Freshman of the Year Kennedy Chandler. In some ways, Chandler’s real college debut was nothing surprising; he was basically as excellent as he was against Lenoir-Rhyne in the scrimmage. Maybe writers who cover schools that have done the one-and-done thing for a while are simply used to this. But man: 20 points and 4 assists right out of the gate against anyone just does not compute for me. I don’t have a scale for true freshmen at Tennessee that matches this.

Your minutes leader: Olivier Nkamhoua. On most nights I think this will be Josiah-Jordan James, but on a night where JJJ was simply off, Nkamhoua was pretty great on the boards (14 of ’em) and posted a two steal/two block outing for the first time in his career.

40 threes. 40 threes! Imagine saying that even a month ago: a Rick Barnes basketball team attempting 40 threes. I’m not sure that if the 2020-21 team had played a four-overtime game, they would’ve topped 30.

A little wobble, then hammering down the accelerator. Tennessee jumped out to an early lead, held onto it for most of the way, but did briefly allow ETSU back into it with a 9-2 run that turned a 24-11 lead into 26-20. Tennessee was only (only) a 16-point favorite per KenPom; 26-20 about a third of the way in converts to an 18-point win, but like all rational people, I prefer not sweating to sweating. Apparently, so does Tennessee; 26-20 was 50-23 in record time.

Olivier Nkamhoua Rating: I’m Allowing a Little Bit of Trust But I Need Some Time. You and me, buddy, we go way back to when Rob Lewis at VolQuest said you were the next Grant Williams. This game certainly looked like Grant Williams to me. But I need more than one game against an overwhelmed ETSU team, even if I and most thought said ETSU team would provide a good test. It’s going to take several weeks to get used to Olivier Nkamhoua, Shooter.

The Fulkerson/Nkamhoua lineup is…agreeable. Until it isn’t. Hoop-Explorer says that the shooting splits with both on the court (27 possessions) against ETSU went 36 Rim/20 Mid/44 3PT; all other lineups against ETSU and UT-Martin are 42/17/41. I’m fine with it for now and it obviously worked, but 1) I’m gonna guess that a 50% OREB% is not sustainable; 2) Nkamhoua will need to average over 2 threes per 40 minutes for the spacing in this lineup to work correctly against SEC competition.

5-out basketball has arrived. I’m not totally convinced Huntley-Hatfield has been given a green light on threes yet; he did hit his only attempt against Tennessee-Martin but other than that, jumpers have been basically non-existent. Fulkerson’s not gonna shoot a three. Neither is Plavsic. So it gave me a little spark of joy to see this, even if this possession ended in a turnover: 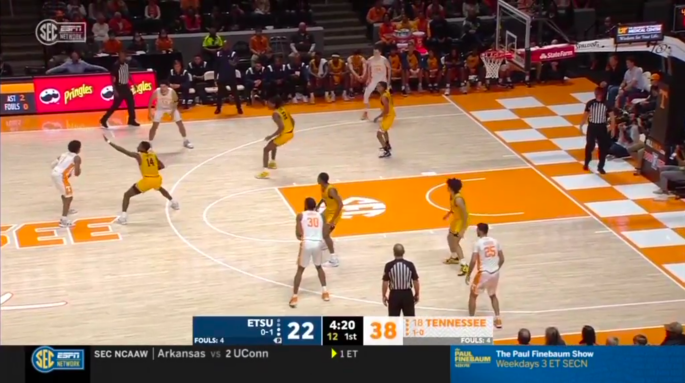 All ten feet are outside the three-point line. I feel like you could count the number of possessions this happened on in 2020-21 where Pons wasn’t at the 5 on one hand, maybe two. I don’t believe it to be a coincidence at all that, of the 19 possessions so far where Nkamhoua is at the 5, Tennessee’s taken 14 shots and precisely one was a mid-range attempt.

Doberman defense, again. I mentioned in the preview for this game that I was a little underwhelmed by Tennessee’s defensive performance against UT-Martin. This was a nice reminder of the potential they’ve got. ETSU posted 0.82 PPP and spent almost the entire game taking well-guarded threes; 10-for-32 feels pretty fair for the shot quality they generated. The general desire for an offense from a stats viewpoint is for >80% of your three-point attempts to require zero dribbles and >50% of your catch-and-shoots to be deemed Open by Synergy; ETSU’s numbers were 69% and 45% and I thought the latter was pretty generous. It’s a good way to turn a potentially stressful affair into a surprising laugher.

BONUS: Early returns promising. Rick Barnes talked a big game this offseason about how much Tennessee was going to take threes this year. This game was less special in this regard (23 attempts), but I guess it’s a sign of how quickly narratives can shift that 23 three-point attempts felt disappointing. Tennessee only took 23+ threes in six of 25 games last season; for 23 to feel a little light is nice. This is also nice, but very early (look at #17):

A fun early-season Miniscule Sample Size check: which teams are currently indicating a desire to change their shot selection the most in terms of more layups/dunks/threes? Perhaps unsurprisingly, eight of these teams have new coaches. pic.twitter.com/VOk8rrPRwN

I hope we’re seeing a sudden late-career philosophy shift here and would like to believe it. I also have watched Rick Barnes have the same shooting splits at Tennessee consistently for six seasons, so forgive me if my current feelings here are “let’s see it in January.”

If you like the format of these or want to see changes, let me know at statsbywill@gmail.com.