This is the sixth in a weekly-ish series of two-game recaps of the 2021-22 Tennessee men’s basketball season.

You spend your entire semi-professional writing career online and you’re gonna make some mistakes. One of them was saying Tennessee needed to deploy a bunch of ball-screens against Arizona, which they did, and then they proceeded to score all of 5 points on 18 ball-screen possessions, per Synergy. Another is seemingly any time I have tweeted about poor Uros Plavsic. The latest is thinking that we were probably all-the-way done on ever seeing something like this again.

Tennessee takes down No. 6 Kentucky in Rupp Arena behind John Fulkerson’s 27pts! pic.twitter.com/PTQ8QEOK4F

I know that Twitch bans streamers for saying a word referring to white people now, so use your imagination, but look at this doofus. Almost no one that looks like this is going to be a quality college basketball player. It does not matter that he is a tall, goofy white guy; it matters that on every play, John Fulkerson looks like he is forcing all of his power and strength into the next dribble. Has there ever been a normal photo of Fulkerson playing basketball? I have done approximately three minutes of research and the initial answer is “no, don’t think so.” I mean look. 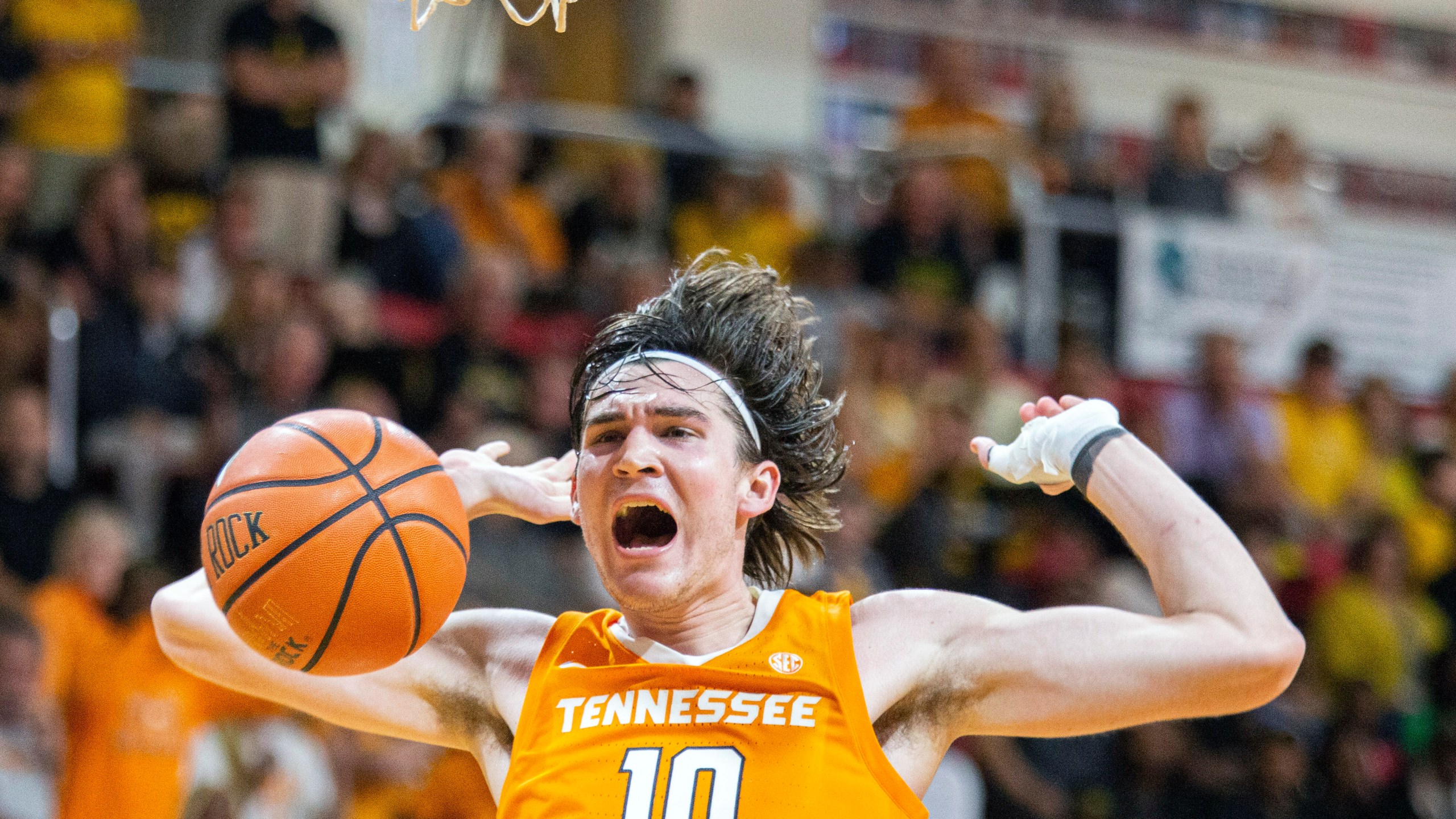 John Fulkerson has never appeared in a normal basketball picture because John Fulkerson is not a normal basketball player. He never has been. What else do you say of a sixth-year super-senior, a player who had twice as many offers from Big South conference members (4) as he did Big Six offers (2)? How else do you describe a player who willingly fades into the background to share the spotlight with the younger, higher-potential members of Tennessee’s roster, yet seems to know exactly when it’s his turn to come to the forefront?

Part of it is that, after six years, you sort of come to believe that he will somehow return for a seventh season, then an eighth. You think you’ll always see the slow post-ups, the shot fakes, the fadeaway shooting method that sees Fulkerson release the ball at an angle that would make every YouTube shooting coach cringe. You think he’ll continue to be there on the nights where you wonder “why is John Fulkerson still so important to this?” And then you see all the little things he does, the little quirks that open up Tennessee’s offense or provide as a shut-off valve defensively.

On March 5, John Fulkerson will take the court for the final time as a Volunteer at Thompson-Boling Arena. I do not feel it is hyperbole to say that, alongside Admiral Schofield’s Senior Day, it will be the saddest, most bittersweet moment a significant segment of the fan base has experienced since Chris Lofton’s final three at home. I know this because every time I attend a game, I look at all the little children who have procured the #10 jerseys. The young ones that are somehow allowed to wear shirts that say Fulk Yeah. (Do you use that language around your mother?!?) The crowd that, every time Fulkerson’s name is announced, explodes in a roar significantly louder for Fulkerson than for any other starter.

For this weirdo sixth-year senior to still be here and still finding baffling ways to draw 13 fouls from one of the best defensive teams Tennessee will play all season is just…I mean, it is. It is, and there is no more making sense of it. Fulkerson is Fulkerson; if he does this again, consider it icing on the cake.

The other thing is that Tennessee held Arizona to 21 points in the first half, their worst output of the entire season, because the defense is an absolute wrecking ball and oh Tony Basilio if you think I didn’t hear your segment about how the defense wasn’t good I’m right here buddy.

What you’re seeing there is Oumar Ballo, a player who had blocked 13 shots and had zero of his blocked entering last night, get his stuff stuffed by Olivier Nkamhoua. It seems obvious that Nkamhoua is always going to draw complaints from Tennessee fans; I guess I get it. The guy still is not a terrific offensive player, and the hopeful comparisons of Grant Williams seem pretty far away. But: as discussed in the episode about bias, Nkamhoua has improved immensely year-over-year. He’s always been a good defender, but we’re looking at a guy who somehow quietly ranks 5th in the SEC in Block Percentage when he’s on the court.

That little graphic above is from last night. The ON is Olivier Nkamhoua. When Nkamhoua was on the floor for 35 defensive possessions for Tennessee, Arizona scored just 26 points. They made just 38.9% of twos with him out there. We’re 11 games into Nkamhoua’s third year. I don’t think he’ll ever be Grant Williams. He may not even be Kyle Alexander. But he could be a silent ringleader of the Death Metal Defense.

Olivier Nkamhoua with an elite out-of-context quote: "We just try to kill everything we see."

I think when you hold the nation’s #1 scoring offense 18 points below its average and become just the second team all season to not only hold them below 1.1 PPP, but 1 PPP, you’re precisely as good defensively as everyone is hoping for. The difference between the Yves Pons defenses and the post-Pons era is one where Tennessee somehow is even better at forcing bad shots and is replacing the supreme shot-blocker with a trio of wrecking balls. Fulkerson, Nkamhoua, and Josiah-Jordan James all rank within the top 100 nationally in Block Percentage; no other team has three players in the top 100. They are as violent as your typical metal album pretends it is.

To be fair to the metalheads, death metal (and black metal, the only sub-genre I can somewhat stand) is not really about death. I do not come away with the impression they’re serious about it. It’s mostly about face paint.

All of these guys, as serious as they appear to be on the outside, are playing music as an excuse to paint themselves. Seemingly 80% of all bands are in it for the paint; try a Google search on this one. And hey: I applaud it. It’s bizarre. It’s funny. It’s creative. It looks very sweaty and very uncomfortable, and it does not make any sense to me that it works the way it does, but it works, and I find that wonderful.

In some weird fashion, this is how I think of the Tennessee defense. In the preseason preview I wrote a whole thing about how I was kind of concerned we’d see an equal stepback on defense as we saw a step forward offensively. That clearly hasn’t been the case. Tennessee shot kind of terribly for a big stretch of last night’s game; the free throws really did push them over the top. But there wouldn’t have been that all-too-familiar please bring this home, you young men, I am overly reliant on this win to feel okay feeling without an amazing defensive performance.

“But they gave up 52 in the second half!” Yes, and they gave up 21 in the first half against a team that averages 91 points per game. Arizona only got off six unguarded catch-and-shoot threes out of 27 total three-point attempts in this game, per Synergy. No team had held Arizona below a 32.4% OREB%; Tennessee held them to 29.4%. Only one team had forced Arizona to turn it over on 20% or more of their possessions in the last 10 games; Tennessee hit 22.6%. Tennessee saw a frontcourt averaging 30 points per game and said “we will play these riffs in your face, silly men.” Tubelis and Koloko, who everyone was rightfully afraid of, combined for almost as many fouls (9) as points (10).

I do not know what the rest of the season holds, because I am not an oracle. But I do know that right now, this baffling collection of old and young talent, all of which I did not expect to gel together the way it has on this end of the court, is the best defense I have ever seen at Tennessee. They have held eight consecutive opponents (four of them Top 100 teams) below 1 PPP; only the 2013-14 Vols can say they’ve topped that at 10, and those Vols did not start the season completely shutting down all competition like these Vols have.

They are imperfect. They are flawed. They are a college basketball team. They are also a truly fun group of misfits, young men, Google Image Search heroes, and, because of course they are, anime nerds. Let’s see where the rest of this goes. For now, Christmas: surely every metalhead’s favorite holiday.