Yes I’ve seen all of your Longwood jokes and they are very funny. So original! Ha Ha!

Anyway, the first thing that will jump out about the Longwood Lancers is that they are from Farmville, Virginia. Secondly, they’re 19-1 in their last 20. This is their first NCAA Tournament, and they romped through the Big South pretty well. They had the best in-conference offensive efficiency by a fair margin. That’s all good. This is also a 14-seed that has not beaten a team ranked higher than 159th in KenPom and has played one game against a top 100 team, Iowa. That game ended in a 33-point defeat where they trailed 73-34 with 16 minutes left.

Tennessee, meanwhile, is coming off a conference tournament championship of their own. Both feel like massive rarities to each school’s respective fans. Of course, Tennessee’s expectations for March are quite a bit higher than Longwood’s. You don’t want to get bitten by the 14-seed bug in the first round, but you don’t want to lower the expectations much, either. This is the best 3-seed in the field, ranked like a 2-seed, taking on a team that ranks 139th and is the third-lowest 14. If anything went wrong, it would be one of the most stunning upsets ever. Then again, crazier stuff has happened. 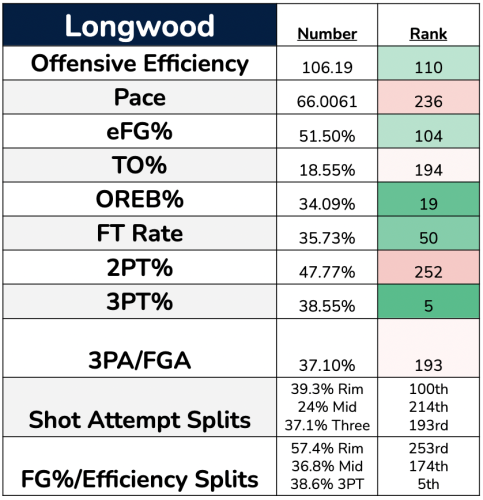 This is the superior unit of the two. You look at those basic numbers and admittedly, some of the sweat starts to build: 5th in 3PT%. 19th in OREB%. 50th in Free Throw Rate. It all feels like your classic Giant Killer coming home to roost one final time to kill off any optimism or hope you have left as a basketball viewer. I promise there is good news coming; we’ll get the tough stuff out first.

Basic offensive structural scout: Longwood runs a good amount of ball screens on the perimeter meant to open up dribble penetration for the guard, who can either take it to the basket or dish it to an open shooter. As shown in the above graphic, Longwood is more willing to get to the rim than take a three, but when they do shoot, they’re pretty efficient. Unsurprisingly, when the tallest player in the rotation is three different 6’7″ guys, you aren’t going to see much posting up. Onto the show.

The best, highest-usage, and highest-scoring player is Justin Hill (14.2 PPG/4.9 RPG/4.2 APG), a 6’0″ guard who is the closest thing the team has to a true point guard. The unusual thing about Hill is his willingness to attack the rim at all costs. You can squint and see Hill as Longwood’s Kennedy Chandler: a guy who takes more layups than threes and is one of the best rebounding point guards in America. Longwood doesn’t push the pace often, but when they do, Hill is the ringleader who attacks the basket like crazy. In half-court, he’s more likely to use ball screens to get what he wants.

Hill is the #1 option; Isaiah Wilkins (12.8 PPG, 6.3 RPG) is the #2. Wilkins is a 6’4″ wing that serves as the 3 in this small-ball offense. The thing you’ll immediately notice and fear about Wilkins is obvious: 40.9% from three on 137 attempts. Wilkins is also the best rebounder on the team and is simply a good shooter in general, but it’s worth noting that Wilkins doesn’t take threes off the dribble. Per Synergy, Wilkins has taken 39 off-the-dribble jumpers this year; 33 were mid-range twos. Wilkins is reliant on Hill and backup Jordan Perkins to create his shots for him, but he moves well off the ball and gets open fairly often.

Lastly: the scariest shooter. DeShaun Wade (12 PPG) is the third option; with a 50% FG% at the rim and more three-point attempts than twos, he’s the second-closest thing to Just A Shooter Longwood has. Wade hit 46.6% of his 148 three-point attempts this year, which is legitimately terrifying. You do not want to let Wade shake loose on the perimeter for any reason. You can’t really run him off the line, either; Wade is 26-for-57 on mid-range jumpers. Still, that beats threes. If Wade gets loose:

It’s not good. You can think of him as Longwood’s Vescovi, in a way.

The rest of the offense is various spare parts of mild interest. Center Zac Watson (7.8 PPG, 3.7 RPG) is fifth in the team in scoring and serves as a ball screen/basket cuts specialist. Leslie Nkereuwem (8.9 PPG, 4.8 RPG) is a defensive turnstile that is the main user of post-ups. Nate Lliteras hit 38.6% of his 83 three-point attempts. Starter Jesper Granlund (4.1 PPG) attempts a shot once every blue moon and mostly stays out of the way.

To sum it up: if Wilkins and Wade aren’t hitting 50% of their threes, they don’t generate much in the way of easy twos. That seems troublesome against the nation’s third-best defense. 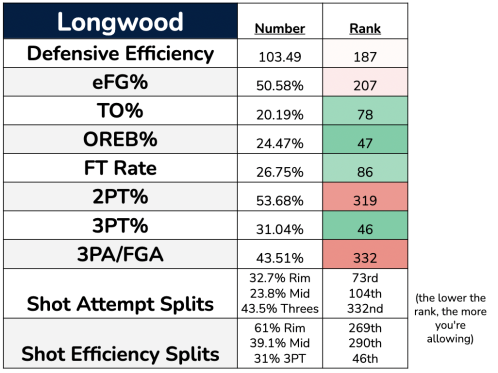 This is the more relieving half of the preview. Some of the Longwood numbers are good, of course; they’re top 100 in three of the Four Factors. I would remind you that those numbers are not adjusted for competition and they came against a schedule KenPom ranks as the 340th-hardest out of 358. This is an aggressive man-to-man defense that forces turnovers and doesn’t commit a lot of fouls, which is nice, but this is also a defense where the tallest player is 6’7″ and they allowed the 274th-best FG% at the rim against said #340 SOS. This is just the seventh defense Tennessee has played this year ranked worse than 150th by KenPom; they averaged 86.8 PPG in the other six games. Even if you want to lower the average by moving that to 100th or worse, it’s still 82.6 PPG across ten games. You get where I’m going.

The first thing I noticed when researching Longwood, other than everything, is that hilarious 2PT% ranking: 319th. Sometimes, teams will have unusually high 2PT% allowed in part because opponents are randomly very hot on mid-range twos against them. This can happen against smaller teams sometimes, but Longwood is allowing a 36.8% hit rate on mid-range jumpers, so no need. This is all about the rim and an alarmingly bad stop rate down low.

Remember that SOS ranking of #340? Synergy, which does not adjust for SOS, ranks Longwood’s around the basket defense in the 4th-percentile nationally. I would not imagine this is a surprise; the leading shot-blocker is Zac Watson, who is 6’7″ and has all of 17 blocks on the season. Longwood only played two offenses ranked in the top 125 this season: Iowa and Winthrop. Across three games, those two teams converted 59% of two-point attempts. Longwood ranks in the 3rd-percentile defending basket cuts, one of Tennessee’s most successful plays. 10 of Longwood’s last 11 opponents have converted over 50% of their two-point attempts. Again, I think you get the point.

However, the one super-positive thing everyone’s going to look at is the 3PT% allowed. Longwood does rank 46th at 31%, which does indeed save their eFG% from being purely in the crapper. That’s about 1.4% below the expected hit rate of 32.4%, which is solid. To go with that, Longwood’s Guarded/Unguarded split of 57/43 is a hair better than the national average, so I could reasonably say this is a solid-enough defense at forcing guarded threes. Then again, this is a Tennessee team that’s hit 39% of threes over the last two months and ranks among the nation’s 70 best 3PT% teams. Longwood played six games against members of the top 70 this year. Those six games: 17-for-72 (23.6%) on guarded threes.

If Longwood has figured out how to turn great three-point shooting teams into dust, I think that’s great. I also think that, considering those same teams shot 24-for-46 on open threes, it’s probably just your average perimeter defense.

How Tennessee matches up

Most of why I think Tennessee has a significant advantage in this game can be boiled down to two things:

I guess these can somewhat go together. Chandler was one of just seven players in America 6’1″ or shorter to attempt 160+ shots at the rim this season. He converted these at a 60% rate, which is good for someone his size. If you want another list, try this: 6’1″ or shorter players that took 150+ shots at the rim and 100% threes. Chandler and Darius McGhee of Liberty were the only small guys this year to meet those numbers and post percentages of 58%/37% or better at both spots. The point is that, on first glance, there is no point guard on the Longwood roster that can check Chandler consistently when he’s driving to the rim. Once he gets there, there’s no big man to really stop him, either. The only team Tennessee really played like this in regular season with a similar height deficit was USC Upstate; Chandler scored 17 points on 11 shots.

The other aspect of this is also pretty obvious: while Longwood has two utterly terrific shooters that held up very well against their best competition, Longwood doesn’t have the ability on the other end to dictate the game on the perimeter. I guess they believe they can, but it’s frankly hard to visualize. If Tennessee’s frontcourt gets going, Longwood will have to sink in to compensate, which will open up a lot of threes for Vescovi and friends.

Defensively, the first task is going to be making Hill take the toughest shots possible in the paint. Hill will get to the paint several times in this game no matter what Tennessee does, and frankly, the idea of him being forced to pass to one of the two S-tier shooters is not really something I’m looking for. Instead, I actually think Tennessee can dare Hill into taking some really bad shots in this game. For such an effective slasher, Hill hit just 54% of his attempts at the rim and 31% of his 84 non-rim two-pointers. Force him into a half-court set and his shot quality drops that much further. The more you can force Hill into shots from 5-10 feet away as opposed to those that are true layups, the better off you’ll be.

Then…the shooters. I would simply title this section “allow as few open catch-and-shoots as humanly possible” because that’s all this really is. If there’s any way possible to force the ball out of the hands of Wilkins and/or Wade, Tennessee may win this game by 20+. Those two are shooting 43.9% from deep; the rest of the team, combined, is at 35.4%. I would take a three-point attempt by literally anyone else on the roster before I let Wilkins or Wade get a clean catch-and-shoot look off. Make these guys finish over the top of long-armed defenders.

Three things to watch for

Justin Hill vs. Kennedy Chandler. Hill’s the top dog and will attack the rim like crazy. Chandler will do the same and is a superior shooter. This comes down to how often Tennessee forces Hill into 5-10 foot shots instead of <5 footers.

Isaiah Wilkins vs. Josiah-Jordan James. This is the most common matchup, at least. In seven games against Top 200 teams (yes, I know), Wilkins was Longwood’s best and most consistent player. I kind of think he leads them in scoring here. I would like to see James use his size advantage here: take Wilkins, a player with zero blocks in said seven games, to the rim. Or just shoot over him.

DeShaun Wade vs. Santiago Vescovi. Shooter versus shooter. Wilkins and Wade shot 45.7% from deep on 70 attempts in the seven Top 200 games; everyone else, 30.1% on 93. My thought is that Tennessee has the perimeter athleticism to force one or the other into a bad shooting night if not both.

One thought on “Show Me My Opponent, 2022 NCAA Tournament: Longwood”