At least with Tennessee, you could’ve convinced yourself pretty easily that they were one minor upset of Kentucky away from an SEC Championship Game appearance. Texas A&M would’ve required quite the amount of mental gymnastics. The Aggies lost eight in a row, lost to Vanderbilt on February 19 to fall to 5-9 in conference play, and were roughly as close to the NCAA Tournament as Georgia. Out of nowhere, they have become one of the hottest shooting teams in the nation with a defense that’s pretty hard to prepare for on short notice.

Tennessee, meanwhile, just put up its tenth Quadrant 1 win and has forced the door open to the 2 seed line after they were once 11-5, 2-3 SEC. Sunday seemed more like a lark than a real possibility two months ago. Now it is here, and Tennessee is 40 minutes away from their first SEC title since 1979 for the third time in five years. If you treat all of these as slightly-weighted coin flips, eventually one has to land in Tennessee’s favor. Eventually.

This was originally previewed back in February, but there’s been some fairly significant changes. I’m still doing the bullet-point structure here because of time constraints. Same basic structure of offense, same general lack of post-ups, same “hit shots and win, or don’t” status. 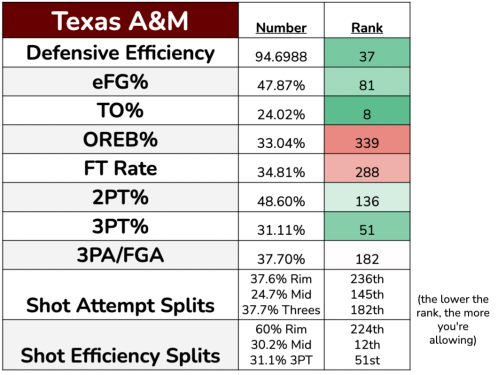 How Tennessee matches up

The first game was more or less Tennessee forcing A&M to solve a math problem: does 3 > 2, or does it not? Tennessee hit 11 threes to A&M’s seven in a game Tennessee won by 12. That game featured A&M hitting some wild shots, which we’ll touch on, but for the most part, Tennessee identified early on that the Aggies couldn’t stop the drive-and-kick game. Tennessee generated 24 catch-and-shoot threes in the first game, and Synergy deemed 18 of them to be open (AKA, no defender within four feet of the shooter). That’s a heck of a rate.

A similar thing will have to happen here to win this game. I don’t know that Tennessee needs to shoot 42% from deep to win again, but against an A&M team that has become the Golden State Warriors of Tampa Bay, maybe you do. Tennessee will likely have to go deep in the clock against an Aggies side that slowed Auburn down into their second-slowest game of the last month. If so: gotta move the ball, gotta hit the nail on the free throw line, gotta look for the open man. Play smart basketball and such.

Along with this: get some good twos. A&M’s biggest struggles defensively this year have come against teams that are either good at converting second chances via the glass or hammer the rim with a variety of off-ball cuts and screens. To boot, Tennessee’s 1.261 PPP in the first A&M game is still the worst defensive efficiency surrendered by the Aggies all season. The threes were one thing, but Tennessee getting 10 points off of nine basket cuts were something else worth noting.

The two missed shots on cuts were via fadeaway jumpers; the cuts that ended in layup/dunk attempts were a perfect 100% FG%. A&M is hyper-aggressive on defense, which lends itself well to forcing turnovers, but they can get drawn away from the basket and give up easy looks down low. Tennessee’s guards need to be smart in taking advantage of the open space down low, just as they did the first time out.

Defensively…don’t turn it over? Texas A&M scored 29 points on 21 transition possessions in the first game; the other 51 offensive possessions resulted in 51 points. You can survive A&M going for 1 PPP, but banking on a second-consecutive 1.2+ PPP game is probably not that realistic. If Tennessee takes care of the ball and forces A&M into half-court offense, the game will look and feel like your average Tennessee basketball game: Sludge City, USA.

A&M spent a lot of time in ball screens in the first game and more or less did nothing with them. Synergy credits the Aggies as putting up just seven points on Tennessee over the course of 18 possessions, which is atrocious. Tennessee completely shut down what Texas A&M primarily wanted to do, and it took lots of fouls and OREBs and a couple crazy shots for A&M to stay in the first game. (Also a serious overperformance on free throws: 21-for-25, or +4 above what they’d be expected to shoot.) If Tennessee continues to own the pick-and-roll, forcing Texas A&M’s ball-handlers into tough decisions, I think they win this game.

I mean: Tennessee is 40 minutes away from the first SEC Championship since many readers were born, including myself. They’re expected to win by every metric system in existence. Whatever it takes to win, win.

Three things to watch for

Quenton Jackson vs. Josiah-Jordan James. Individual plus-minus is about as useful as nothing at all, but sometimes it’s right: Tennessee was +8 with James in the game for 30 minutes yesterday and -1 in 10 minutes without him. They’ll need James for 35 to slow down one of the hottest scorers in America.

Henry Coleman III vs. Center Roulette. Coleman has held steady throughout the year as a terrific rebounder and quality foul-drawer that nonetheless cannot create his own shot very well. If Tennessee restricts him to just rebounds and exploits his lack of verticality on defense, they could create a significant advantage.

Tyrece Radford vs. Santiago Vescovi. Pretty simple matchup: who shoots better? Radford is blistering the nets at the moment, but Vescovi may be the SEC’s best deep shooter.