Rick Barnes, a champion mobbed by his players who wanted to give him the net. pic.twitter.com/zILnJU1FPt

Perhaps the kindest thing Tennessee did was remove an immense amount of anxiety and drama from the SEC title game not even five minutes in. The game started at 0-0, obviously; it was 14-0 in essentially no time at all. Texas A&M never led, and the game was never within five points after early in the second half. It was rarely in double digits. But you’d be forgiven if you were a Tennessee fan and you were still waiting for the other shoe to drop with Tennessee up by 13 and 90 seconds still to play.

That is how things generally work here. The impossible is always possible at Tennessee. Purdue, one of the greatest shooting teams I have ever seen Tennessee play, can miss half their free throws, but a future insurance agent hits seven threes to win the game. Loyola Chicago can blow a 10-point lead, but win anyway because of a double-bounce mid-range pull-up. Tennessee can make their first Elite Eight, then have to fire that coach a year later. Tennessee is up on an 8 seed by six with four minutes to play, then never scores again. Tennessee can go 30+ years without a single coach lasting longer than six seasons.

Almost anything ends up on the table at this school. One of the only things that truly felt impossible was being able to lift the trophy on Sunday. Tennessee made it to Sunday one time in my life prior to 2018, played a significantly worse Mississippi State team, and lost. Tennessee was the higher-ranked seed in 2018 and 2019 and lost both of those, too. When the year counter increases by one every time out and touches 43, hope feels like a foreign concept.

As with everything written over the last month, this all starts after losing by 28 to Kentucky. I complained after the game that the Tennessee Treadmill had restarted and this team was well on its way to another annoying, forgettable run as either a 4 or 5 seed in the NCAAs. Maybe they make it to SEC Saturday, blow a late lead to Kentucky or Auburn, and this time I just laugh instead of feeling annoyed. 11-5 and 2-3 SEC, regardless of competition, is a record you look at and sigh towards. You beat Arizona at home, cool. Where’s the other wins?

The ratings on January 16 are a fun time warp of sorts. Every team in the top 16 finished 19th or better, which is remarkably steady for a season with two full months left, but the order of those teams became jumbled. At the time, though, you could argue opportunity was nowhere.

Fourth in the SEC with a loss to the fifth-place team below you that seems to have your number under their analytics darling head coach. An offense that, aside from that random Rupp explosion, resembled Iowa football. A sixth-year senior that scored zero points against the conference’s best team. No truly rootable players. Zakai Zeigler had not yet forced a stranglehold on the hearts of Tennesseans. 14th in KenPom is nice until you remember the 2020-21 team was 12th at that time the year prior. It can always get worse. Why wouldn’t it?

So, sure, Tennessee goes on a run that’s at least partially influenced by a lighter schedule. You get some really great home wins that you remember happily, but they’re all at home. The best non-home win remains a North Carolina team that just got an 8 seed.

Tennessee finishes SEC play at 9-0 at home. The Vols have also beaten Arizona in Knoxville. Their best win away from home? North Carolina at Mohegan Sun.

You head to Tampa, which isn’t even Nashville, playing what’s best described as a fairly potent brand of feelingsball. You will remember this team; will anyone else? Tennessee gets teams stuck in the mud and whatnot, and you like their March odds, but you see Kentucky at second in KenPom and Auburn drawing a mid-50s Texas A&M team and figure you’re in for yet another SEC Tournament kick to the nuts. It never goes well. Why would it now?

Texas A&M wins and you get a little excited. Tennessee takes care of business; Kentucky struggles, but does the same. You head to Saturday with the same feeling of not wanting to be Charlie Brown running at Lucy holding the football for the 43rd year in a row. Tennessee beat Kentucky at home, but again, that’s at home. Amalie Arena was decidedly decked out in blue, almost like it would be for your standard Lightning home game. Tennessee has to overcome not just this, but the officiating pairing of Pat Adams and Doug Shows, the only officiating combo that can manage to unite Tennessee and Kentucky fans in anger.

Tennessee trails for all of 27 seconds in a game that’s rarely within eight points until the final couple of minutes. Kentucky makes their run, and then you remember the critical tenet of Feelingsball: Act like every high point in the game is simply Sisyphus reaching the top of the hill. The rock will roll down. Back up you will go. This should be impossible, but impossible always happens here. Kentucky will do their usual, as will Tennessee.

The most cathartic, signature moment of a game is not a made shot, or a block, or anything normal at all, but a hard-hat lunch pail rebound by a 6’3″ Uruguayan shooting specialist despite being boxed out by a pair of Kentucky players that are 6’7″ and 6’9″. If you could name a stronger, more perfect signature moment of the Rick Barnes era, I would like to hear it. It is absurd, and it is real, and it is beautiful, and it is Tennessee.

And then they win, and then you briefly allow yourself to think that This Is Real. Tennessee got to sit and watch the previously-assumed conference title favorite Arkansas go down to that mid-50s Texas A&M team, who gets to build their NCAA Tournament case on a national scale. The odds, more or less, have never been better. But then 2009 pops back into your head. It can’t actually be real, because it’s never been real in my life. The Feelingsball Team, the one that was born of the mud and drags all opponents into the mud with them, may be incredibly fun. After 43 years, or 28ish for me, you just have to see it to believe it.

All this team had to do was see it and believe it for 40 minutes on a Sunday in March. They were able to when mere peons like me could not. They saw 11-5, 2-3 SEC and laughed in its face. The SEC kept sending its best and brightest to Knoxville to attempt to pull off road victories, and every challenger failed. Then when Tennessee got to head south for a weekend, they took on the conference’s assumed best team and stuffed their top-10 offense in a locker for the entire game. They drew Texas A&M, a team that had played at the level of the 8th-best in America (per Torvik) over its last ten games, and blended their offense into a fine paste with burgundy tones. At game’s end, I thought about wishing my grandfather could’ve made it another month to see it, but his afterlife broadcast of the game was not interrupted by Xfinity and did not include the wire camera angle. Even better.

This Tennessee team has been telling anyone who will listen for two, three, even four months that they are legitimate. That they can do things no team has ever done in the history of the program. That they are capable of creating memories fans and followers believed impossible. Tennessee is two seed upsets away from the Final Four, and only one KenPom upset out of it potentially against a team they’ve already beaten. The prospects of something unforeseen no longer feel like attempting to see clearly through a kaleidoscope. The metrics are there to tell you that it’s okay to feel these feelings: 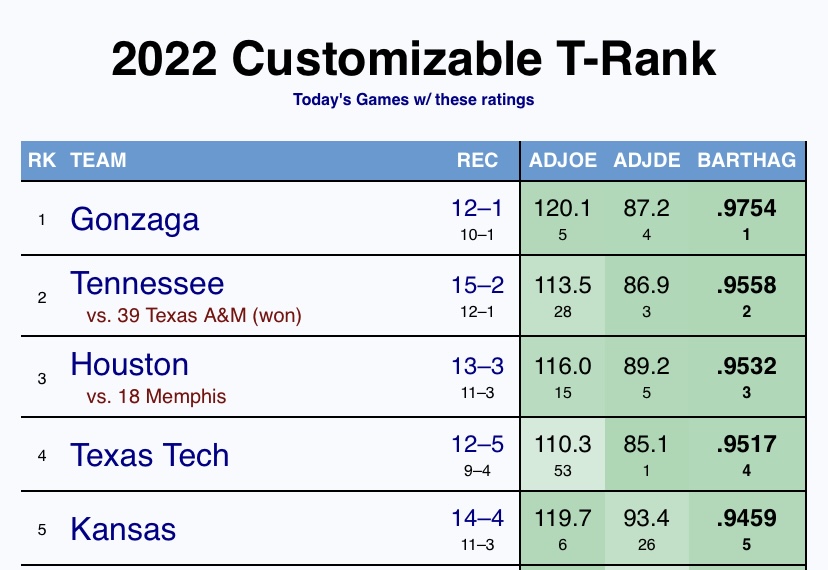 That’s since January 16, one day after the Rupp blowout, one day after it all felt meaningless. These kids believed it was far from meaningless; it was merely the start of a new season to them. They deserve it all. They gave us the good feelings, and turned it into something people have been waiting over four decades for. It’s worth letting America in on the secret.

Notes section and whatnot:

Thanks for reading along this season; I hope March never ends. More coming, and if you would like me to be on your podcast or website or something, email statsbywill at gmail dot com.