What you’re looking at here are a pair of simple graphs created in Microsoft Office, because I am too dumb to have figured how to use R out yet. Here’s the average shot selection of all teams from 2011-12 to 2020-21, as determined by the amazing resource Hoop-Math.com: 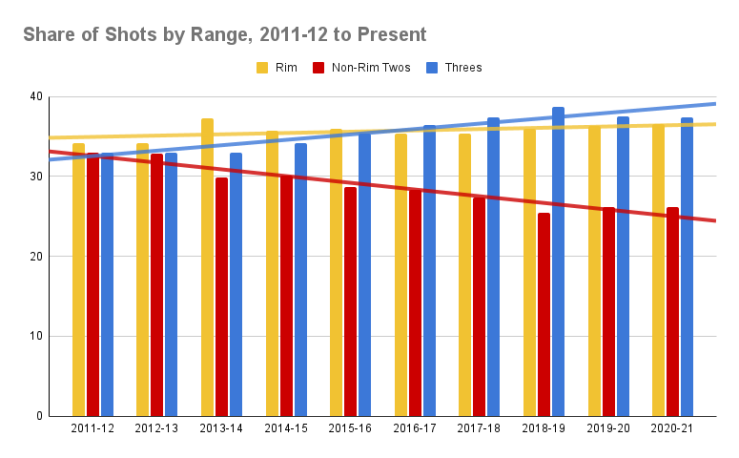 And here’s the average shot selection of offenses with an eFG% ranking in the top 25 during that same time span.

Notice anything? (Other than the fact I chose the color scheme based on very vague memories of the color triad in seventh-grade art class?) Yeah, same here. On a per-100 shot basis, the best-shooting offenses in college basketball are using around 4-5 fewer shots on non-rim two-point attempts, distributing those attempts somewhat evenly between extra shots at the rim and from three. Over the last four years out of a 100-team sample (the top 25 from each season), only seven teams took even 30% or more of their shots from non-rim two-point land, with five times that number – 35 teams – taking 20% or less.

Like it or not, Moreyball and the Houston Rockets have started to make their impact on the college level. Teams are taking fewer mid-range jumpers and more corner threes than ever before. Offensive rebounding is slowly going down. Free throw attempts are slowly going down, too. Teams are happier to take threes, because threes count for three points and not two. The average shot attempt split of the 100 best shooting offenses over the last four years is 37.9% Rim Attempts, 21.8% Non-Rim Two-Pointers, 40.3% Threes. The pattern is quite clear; it’s just on how quickly Big Six schools (median of 35.5% Rim/27% Non-Rim Twos/37.5% Threes) are willing to catch up with their lesser-known mid-major counterparts (median 35.7% Rim/25.3% Non-Rim Twos/39% Threes).

We still haven’t answered our question yet, though. What does this actually look like on a single-team sample? For that, I looked locally to the program I write about all the time: Tennessee basketball.

I’m focusing on last year’s Tennessee team, a team that I previewed every game of and watched every minute of basketball they played. Despite high preseason expectations and rising quite high in national rankings, they finished the year 28th in KenPom with a first-round exit to their name. The main reason for this was an offense that finished the season 85th-best in KenPom’s Adjusted Offensive Efficiency (one spot behind 9-16 Kentucky), including an eFG% of 49.6% that ranked 189th-best.

As someone who ‘covers’ the team, a main frustration as a viewer is how many non-rim two-point jumpers Tennessee attempts each night. Over the last four seasons, Tennessee has averaged 34.3% of all of their shots being these non-rim twos, a figure only bested by one of the top 100 eFG% offenses from 2017-18 to 2020-21: 2018-19 Tennessee themselves. Last year, Tennessee’s shot attempt splits looked like this:

And their shot efficiency for each was as follows:

As mentioned above, this all calculates out to an eFG% of 49.6%. For a high-major basketball team, that’s pretty middling; among the 87 teams in Big Six conferences + the AAC, this figure ranked 51st, one spot behind a Boston College team that finished 4-16. However, it could’ve been better if Tennessee played along with my experiment. If Tennessee had adopted the Top 100 shot attempt splits of 38/21.7/40.3, how much better would their eFG% have ended up?

Without changing anything about their field goal percentages at these three categories, Theoretical Tennessee’s eFG% would have risen by 2.5%. Again, this is a team that barely cracked 33% from three. You wouldn’t expect them to have any sort of bump from a minor alteration like this. But simply because Theoretical Tennessee cut their non-rim two-point jumpers and added more rim attempts/threes, they went from a Boston College-level shooting team to one outranking Final Four participant UCLA. A 52.1% eFG% would’ve finished 25th-best among those 87 teams, and that’s all without changing a single thing in terms of if the shots went in or not.

With this, we can see just how critical and important it is to limit our non-rim two-pointers. The right players with the right mindsets should obviously be allowed to take them (any ball-dominant guard or highly-confident post player counts here), but taking these shots out of role players’ hands is, in general, the right call. While the desire to score at all three levels is certainly noble, it doesn’t work in modern college basketball like it would have ten years ago.

What would it have taken for Theoretical Tennessee to become a top 25 eFG% offense themselves?

We’re going to stick with the same 30.8%/34.6%/34.6% split that the actual team had for simplicity’s sake. For this experiment, let’s say that Theoretical Tennessee shoots as well as they ever have from the rim (66%, 2018-19) and from three (38%, 2017-18) as they have in the last ten years. Both of those numbers are pretty good, and they would’ve ranked 22nd and 17th best in each category, specifically. If you’re shooting that well from two out of three categories, you’re probably fine shooting 37.8% on non-rim twos, right?

That’s five teams in ten seasons, or about one every other year. Worse yet, it’s happened just twice among high-major teams. If you’re able to somehow achieve this, congrats on your deep run in March Madness. If you’re like the hundreds of other teams that cannot do it, it might be time to change up the type of shots you take. This is not meant to demonize Tennessee or even the mid-range shot attempt; it’s more of showing just how elite you have to be at all three levels to truly be a three-level offense. It is really, really hard to be great everywhere; that’s why it is wise to maximize your highest-percentage shots over the ones that admittedly look and feel cool.

Part of this is reliant on your lineup, of course. Per Hoop-Explorer.com, of the 100 best lineups (minimum 100 possessions) among Top 150 KenPom teams in 2020-21, only seven featured three or fewer players that attempted at least one three per game. 45 of those 100 featured five serious shooting options, and the average lineup featured 4.38 three-point shooting options. (Perhaps the way forward is four legitimate shooting options with a fifth player that can shoot but doesn’t do so more than once a game, like Drew Timme.)

However, that’s just the historic splits for one university. What if we created a different hypothetical team – one that wasn’t that great at shooting anywhere, but did maximize certain spots they took shots from?

NEXT PAGE: Yes, even more hypotheticals